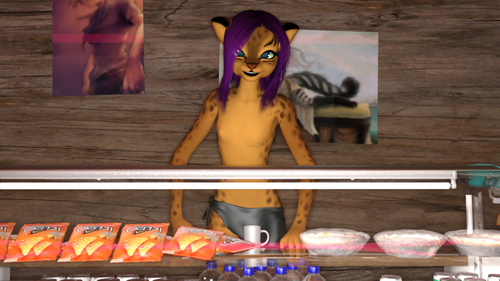 When these promo pics started, I didn't immediately do so for every power of two. The first time was at 60 downloads, then 100. It wasn't until the third that I'd switch to powers of two with 256 downloads. That of course means that the next promo gift walllpaper won't be until the download counter reaches 1024.

In other news, just last night Foone Turing tried to run the demo in ScummVM and had some issues I can't place nor replicate. From what I can tell he was running an older version of the game — there were a few tells. Trying it myself, I noticed some minor issues that I've been working on in my work-in-progress copy.

(I'd hate to beg, but I'd really like an original soundtrack.)

Not an issue, but there's been some tweaking here and there of the background art also. Maybe I'll post an all-new demo build again, with all the new fixes and such. Would have to get ScummVM Nightly updated too, then...

Get The Dating Pool